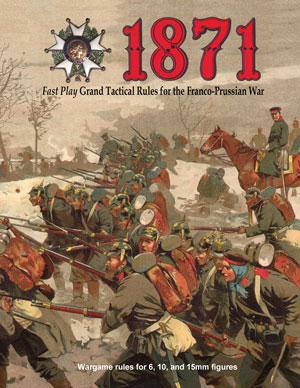 1871, published in 2017, is the final booklet of the Grand Tactical Rules series, and a complete makeover of the original 1870-based rules.   Like 1870, it covers the Franco-Prussian War — including battles both in 1870 and 1871.
Unlike 1870, however, 1871 is truly a set of fast play rules.  The basic structure of the original rules remains — the command and control, movement, unit organization and basing (all the stuff that worked very well) — but the overly-detailed combat resolution, charge, and morale portions have been radically condensed and streamlined.  The results are almost identical to the more granular 1870 rules — even though game turns generally take about half the time.  For players who desire the greater detail of the original rules, the 1870 series is still quite viable … but for those with less time, or larger battles to fight, the 1871 fast play version is ideal.

Rather than point elimination, attrition is now based on stand elimination.  All stands, moreover, are standardized at one point each; the differentiation between them is found in the modifiers.  But the modifiers for artillery, rifle fire, and melee combat have been severely reduced …as have the number of die rolls required.  Play, therefore, is speedy.  Gamers can spend much more time behaving like generals, rather than organic computers.

As in the previous rules in the series, there are plenty of illustrations: examples of play, formations, and historical artwork, most of which are in color.  The maps are improved, and the scenario victory conditions — although still based on each side’s historical objectives — have been carefully honed to allow both sides a reasonable chance of winning the scenario  …except for the Sedan scenario, however.  Any German player who loses that one should be dismissed from the army immediately.

The 1871 rules are complete; you don’t have to have 1870 to play them.  Therefore, there is little repetition of historical background material found in 1870 — although the twelve scenarios contain an abundance of background information, and a succinct summary of what happened in the historical battles.

In addition to the basic “grand tactical” (full) scale, there are half- and quarter-scale variants for smaller battles: two or three divisions or brigades per side, respectively.  There is also a “2/3 scale” variant for very large scale battles, without having to buy and deploy an enormous number of bases.  The four page 1870 quick reference sheet has been reduced to a single color 8.5 x 1 inch cardstock sheet.

The success of these fast-play rules led to the creation of similar fast play quick reference sheets for 1859 and 1866. 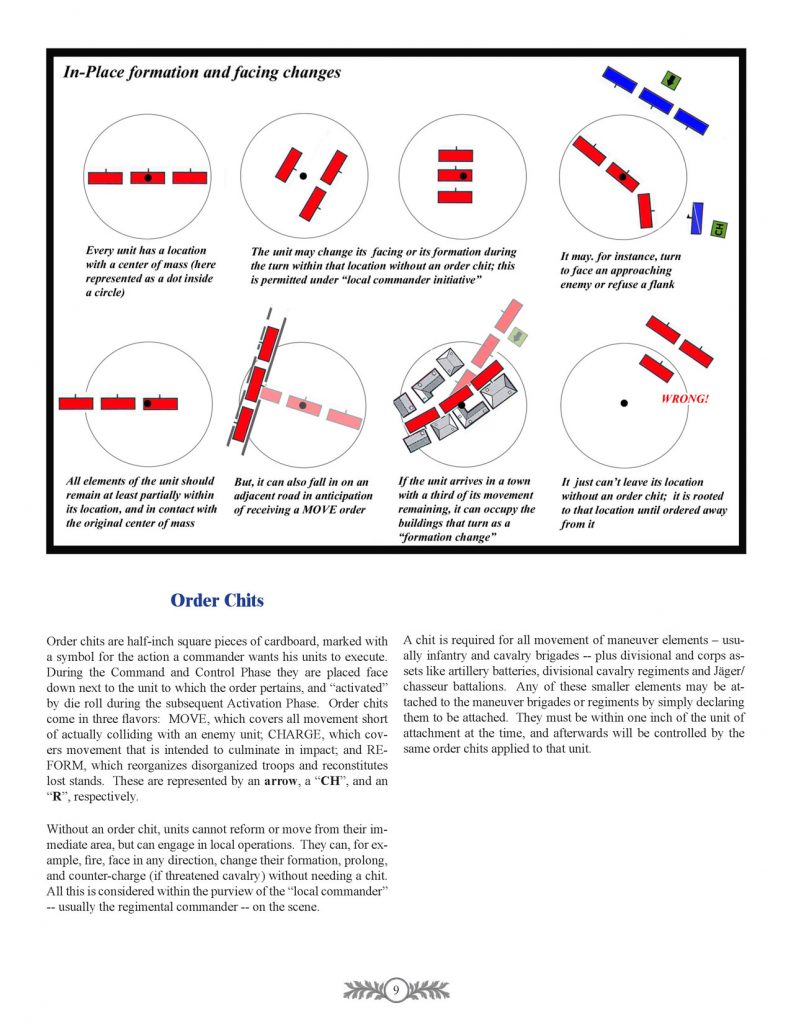 Clear diagrams illustrate the (non-) complexities of movement and maneuver.  The movement criteria has been greatly simplified, as seen on the much friendlier movement table. 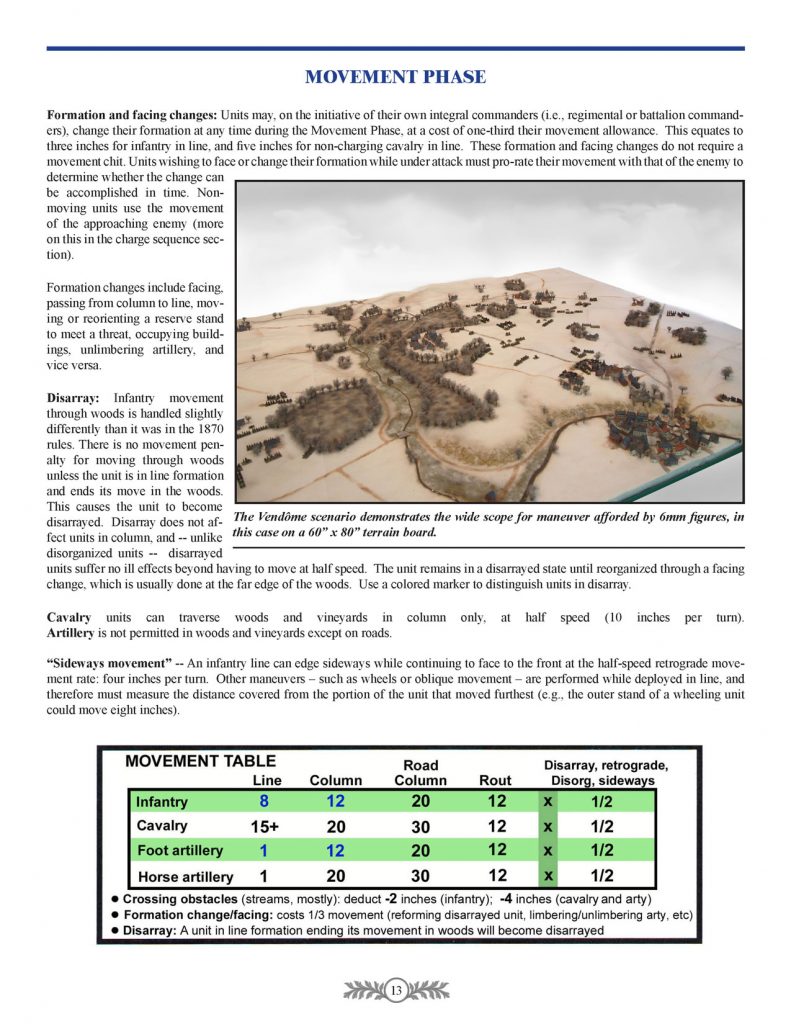 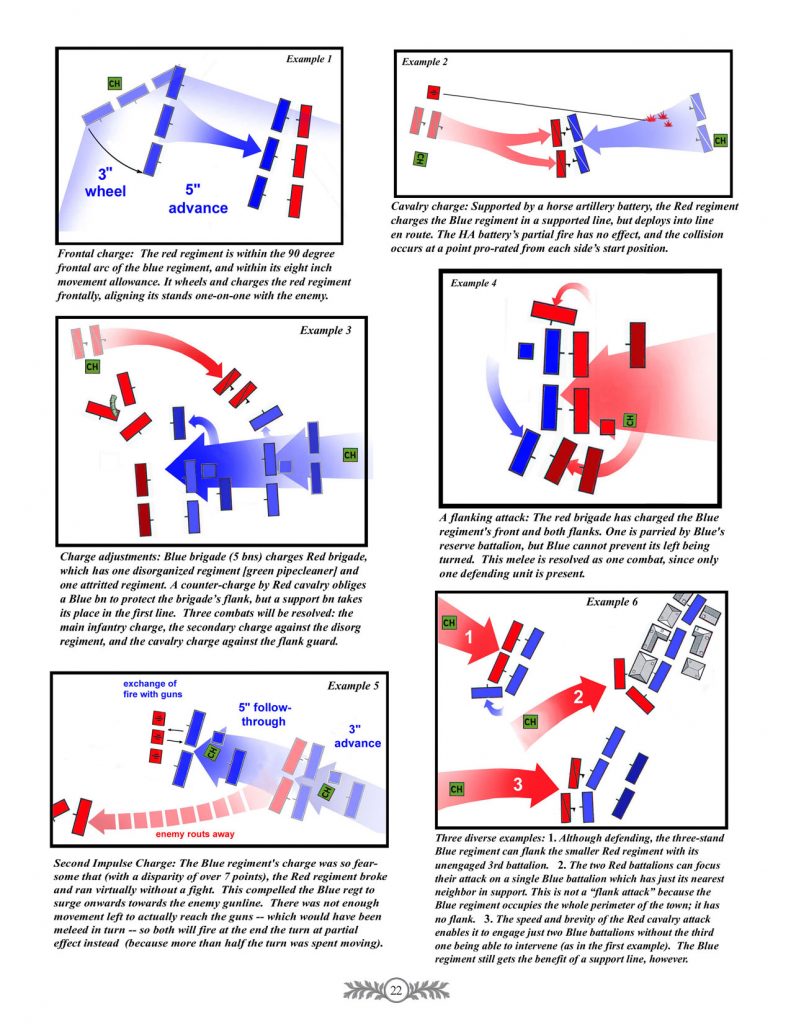 Examples of play abound, many showing the sequential development of combat.  The scenario maps — all based on official sources — now use shaded, rather than numbered elevation levels …but most could, for simplicity’s sake be reduced to just two levels in most scenarios. 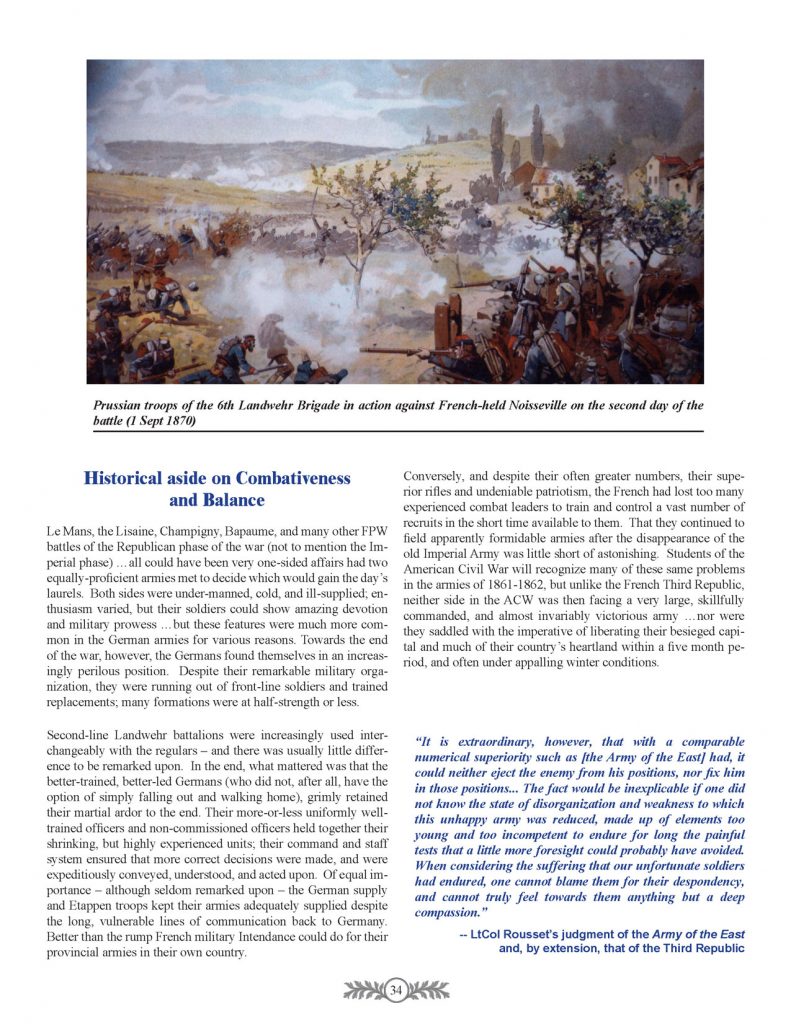 Although the historical narrative does not repeat the extensive notes found in 1870, there are several pages of material intended to familiarize the player with both the rules and the Franco-Prussian War.  More tips on terrain board-making are included, including a “quick set up” board intended for one-time use. 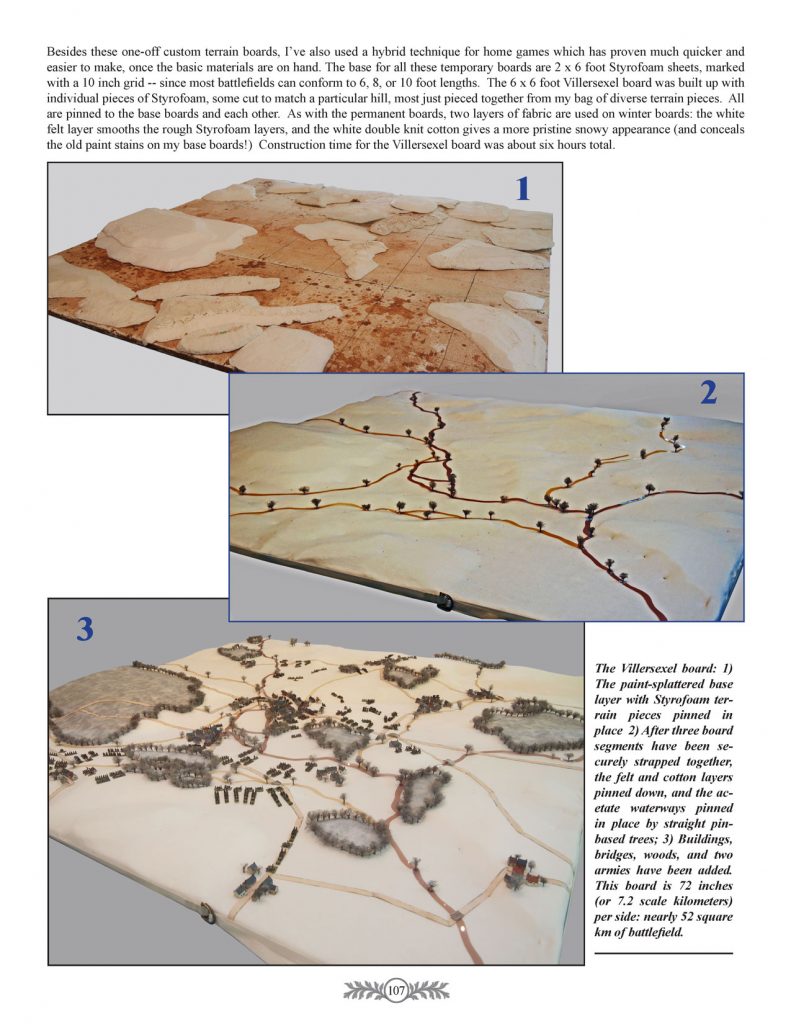 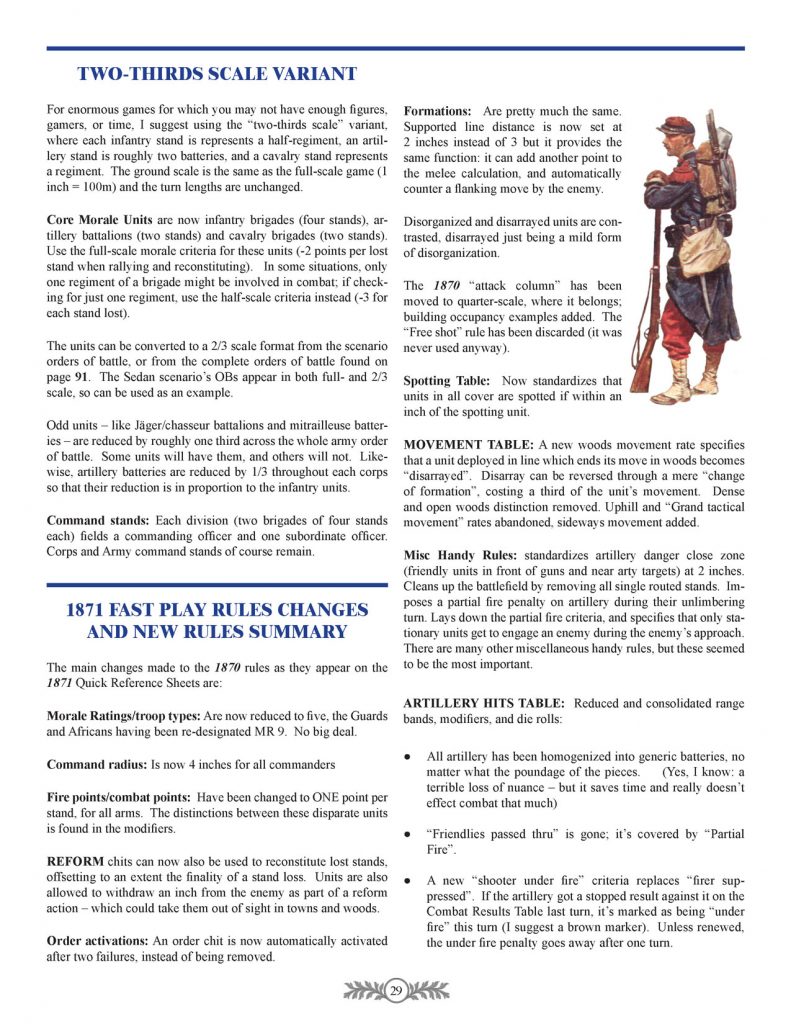 For extra-large battles, a new “two-thirds scale” has been added, enabling a 1/3 reduction in the number of stands on each side.  The differences between the new and the original rules are explained in a short summary, and the new quick reference sheet has been colorized and reduced to a single two-sided sheet. 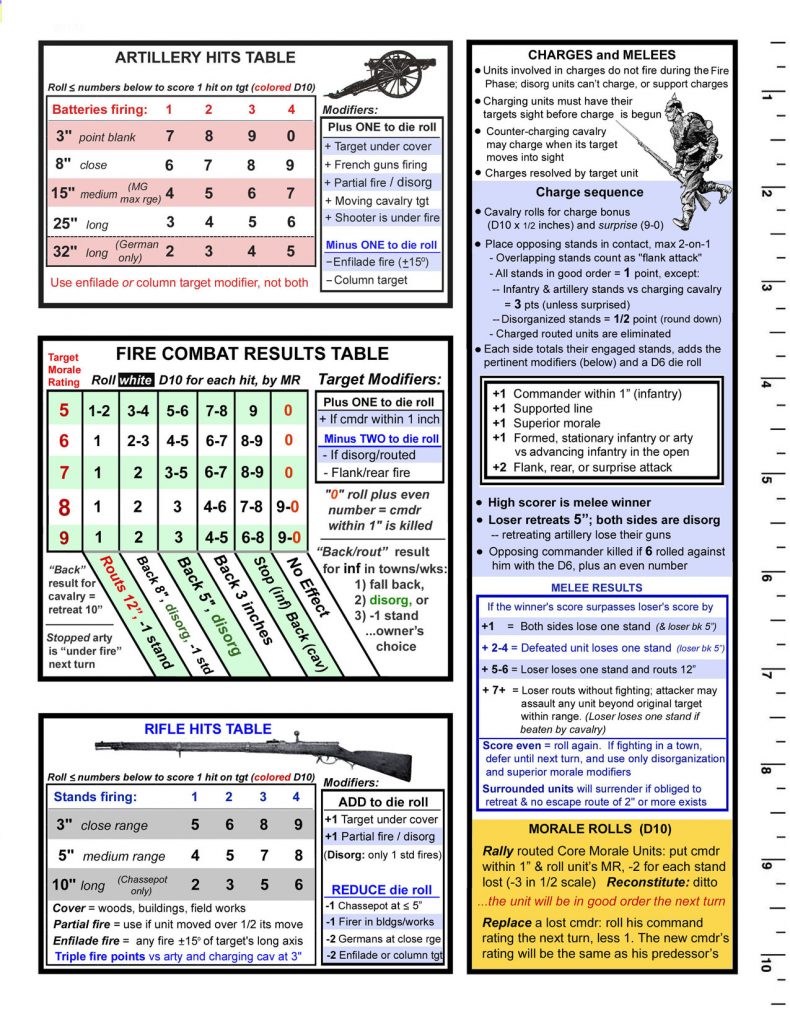 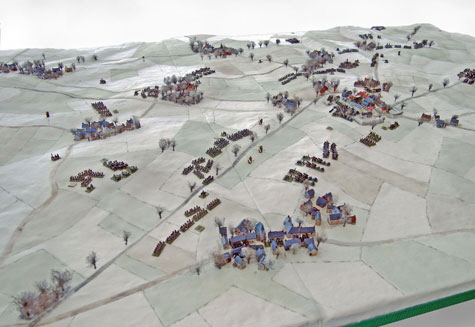 In this half-scale game, the French Army of the North is closing in on both Bapaume in the center and the twin villages of Ligny and Tilloy in the foreground.  The successful attack on the two villages enabled the French right wing to threaten the Prussians’ line of communications, forcing them to abandon Bapaume  — a French upset victory. 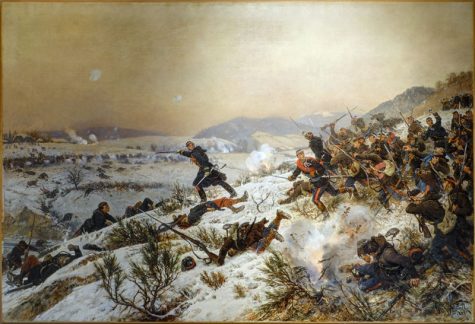 French artist deNeuville painted the attack by garde mobiles on the Prussian-held town of Chenebrier in 1884, 13 years after it was taken in this attack.  The town’s capture was the only real French success during the fighting on the Lisaine River (scenario 11 in the 1871 rules booklet).

No comments to show.

No archives to show.